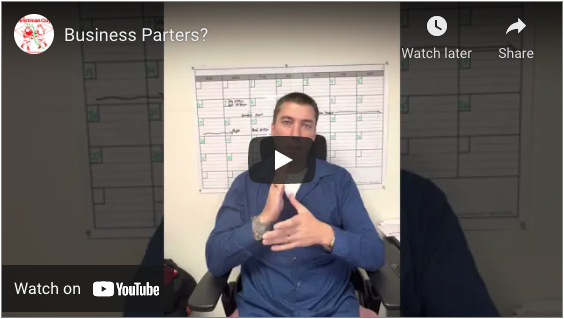 Are business partners a waste of time?

Hey guys Captain Matt here once again with another business video, you can probably tell from my shirt, anyways that’s it’s own marketing video. I just want to talk to you about having a partner, I know when you hear about partners in business it’s always like “don’t do it, it’s the worst thing”, and I’ve had partnerships where I fully agree with that it’s totally bad, but I mean the same can be said about marriages, right? I mean if we only went off the bad none of us would ever get married, none of us would ever get married because why would you want to if all you ever heard and focused on was the divorces and the bad things that happened.

So with The Christmas Guys, Elfperts Inc, and Barefoot Lighting I have a partner, Maverick Mike, and what’s funny is my wife calls him my second wife, and it really is it’s like having a marriage that’s only about money, there’s no sex, there’s no cuddle time, or watching TV together, it is like a marriage only about the money. But, as long as both people really know that going in, and they have a pretty firm written agreement about the roles and responsibilities of each one. That is key because I know sometimes people ask me “‘oh, I don’t see Mike doing X Y or Z” and I laugh because they also don’t know our agreement.

So, when it comes to partnerships it definitely is like a marriage all about money, but keep that in mind some marriages fail, some marriages succeed and grow. Don’t lose out on a business venture or an opportunity simply because you need a partner, sometimes a partner is the only way that you can actually grow, the only way that you can get to the next level, or sometimes it’s the only way you can start. Maybe you have a great idea but your specific weakness might be a key part of actually starting or growing that company, so bringing on a partner, if you can’t afford a staff at that time, where they have different strengths their strengths fill in your weaknesses, your strengths fill in their weaknesses. Basically you’re building like one person, all the good stuff from each individual putting them together and then hitting the ground running. Or, leveling up faster.

So again, partnerships, they can be great, they can be horrible, but so can anything in life. Don’t make a decision on a partnership simply by going to google and reading the top 10 results that’ll tell you partnerships suck. Anyways, it’s been Captain Matt. I’ll talk to you guys soon.