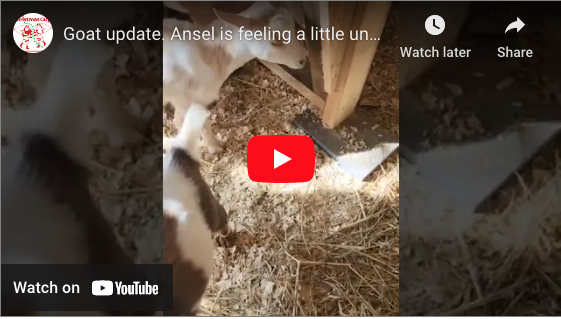 Ansel is feeling a little under the weather.

Hey guys, I’m out in the goat barn today. I haven’t been able to do much work on it lately so it’s got the goats but I want to get the hay feeder built today. I’m not sure what I’ve got so far I gotta go into town today and get some supplies, Tractor Supply for the goats. Ansel is not feeling 100%, he’s a little out of it today. We think it might be just the heat because we had good cooler weather, I should say a lot of rain, and then it’s hot again today. His poop’s a little soft, so you know we are new to being goat owners, so it might mean that his tummy is upset, or he could be really overheated. He is drinking water we’re gonna get some- Willow’s eating my shorts- we’re gonna get some electrolytes and things like that for him, some stuff for his belly in town. Right now he’s hanging out in the hay feeder, so all I did was just make it, I gotta hang it.

-Okay, okay that’s enough of my pants- It’s at an angle here where Ansel is standing, we’re gonna be putting a metal goat panel. That is basically like the fencing out here it’s like this galvanized heavy duty stuff, but instead of it being six by eight squares it’s gonna be two by four so they can get enough to get their mouth in there and pull out hay. It should eliminate or reduce waste quite a bit from what I’ve read online. I have to go get that panel, it’s gonna go right here in the front, and then what we’ll do is we’ve got this solid back on the back here, just like that plywood nothing special, this opens up and we’ll be able to throw hay inside here -Hey buddy- and then when we’re done close it back up just to keep stuff out of it in case it goes over. To get up here I’m going to be building platforms for them here soon, you can see how much weight so I just basically putting it on the ground for now, the bale, and they’re picking at it but they don’t like it when they hit the ground, it’s too dirty for them. I’ll be back soon!