Should I knock on Doors? | Marketing with Captain Matt 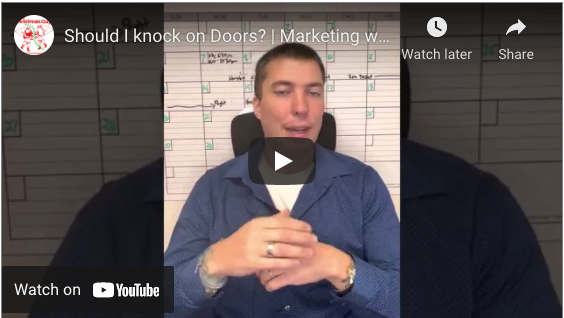 Does knocking on doors work?

Hey guys Captain Matt here, I want to talk to you more about some marketing techniques and things. So specifically in this video I want to talk to you about door-to-door sales, cold calling on the door. Now, I remember back when I was a kid that this was a very common thing, and even more common in my parents’ age when they were growing up. So it used to be a guy would come knock on the door and try to sell you something, they get a vacuum, even boy scout candy, girl scout cookies, I don’t even do that stuff anymore and I noticed that there are some companies now that are really driving home this door-to-door sales, knock on the door in the service business specifically and I know that it makes this big uproar on facebook groups and in the neighborhood apps, but I mean if it wasn’t working they wouldn’t be doing it, right? So I mean I know for me, I got one of the pest control companies simply because they knocked on my door. So I’ve never bought the books though when they come “I’m a college kid i’m selling books or magazines” never done that for, and then I think solar does it, and the tree guys “Hey we’re in the area”. So it got me thinking, maybe it’s something that I should try with some of our lighting, specifically the soffit lighting, which kind of suits everybody in every budget because it’s just a one-time install. What do you think about door-to-door salesmen? If it wasn’t working would they be doing it? Fox Pest Control, they do it, if you are in this area you know they’re gonna knock on your door at some point, probably once a year. I was actually talking to them, so they are from Utah originally and the owners were Mormon, and so they said they were really used to knocking on doors and talking about religion. So, when they went to do pest control they were now knocking on doors talking about pest control, I’d imagine it’s a lot easier of a discussion cold calling or cold knocking, whatever the proper terminology is on that one. Anyways really thinking about it but in today’s age of ring cameras and whatever type of other cameras there are and everyone’s just so on edge, especially right now with covid and mask wearing, it’s like you see somebody coming towards your door and it’s high alert, and posting on the group, it’s doing screenshots of the guy posting them “who is this guy? He says he’s with this guy”. Anyways I know a lot of it goes into that ridiculous territory when it comes to social media and people talking about who’s on who’s at their house, who’s on their door. So anyways let me know what you think about it, and that’s a little marketing with Captain Matt, talk to you guys later, bye.