We are the story we most tell ourselves! 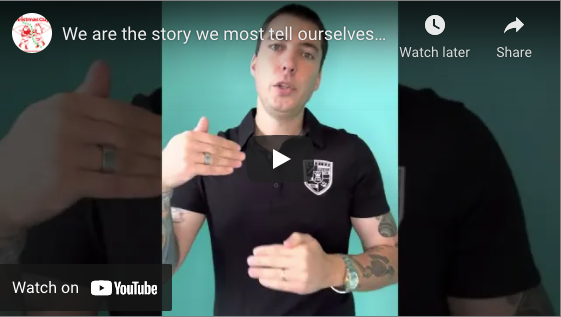 How I manage irritation, anger, and rage.

Captain Matt, Wake Up Warrior, another part of my routines and everything is the angry stack and the irritated stack. So basically it goes: irritated, angry, mega- or irritated, angry, rage. Irritation that’s not let out becomes anger, anger that’s not let out becomes rage. So I find myself doing a lot more irritated stacks now versus angry and mega even though I still 100% need to do all of them, but the irritated stack might be something small like your kid not shutting the door, or your wife putting the cereal box somewhere where she doesn’t normally do it, or whatever the case may be. Doing an irritated stack and journaling about it and and getting it all out, why you’re irritated, what you would do. What’s the story that you’re telling yourself right now? Because the stories that we tell ourselves is what matters most, we are the story we most tell ourselves. Doesn’t matter what anyone thinks, the ones [stories] that we say to ourselves the ones up here is who we are, and it’s what happens. So sometimes when you do these irritated stacks, or any stacks, when you have to find out what is the story that you’re telling yourself. Now you’ll find out that you’re telling yourself a bunch of BS that isn’t true. So the irritated stack is usually a lot quicker because it’s just an irritation but you can get it all out, a lot of times laugh at yourself and get it out before it becomes anger, before it builds up into some big blowup for no reason, and that is the irritated stack. Angry stack is just like an irritated stack except for a little bit more beefed up, because at this point you’re angry. Then in the other video we talked about the mega or the rage stack, and that’s when you can’t see anything but red. Yeah so there is my video there to tell you guys about how I’ve been processing my irritations, my anger, my rage.