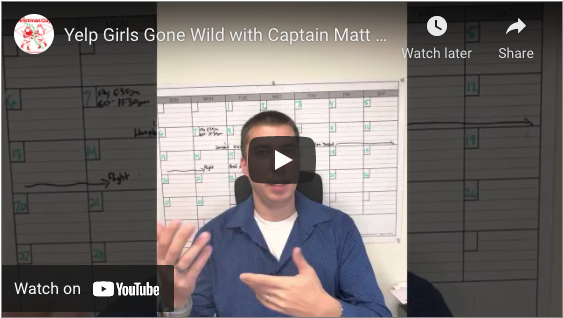 We need to talk about the Yelp girls.

Hey Captain Matt here, doing another little marketing video here. Something I wanted to touch base on and if you own a business you probably know exactly how this relates; when Yelp calls you. The second you hear that Yelp calls you what’s the immediate thought you have? That it’s going to be a female on the other line, very attractive sounding and very flirtatious conversation, which is a fun conversation because they’re so nice, it’s how they keep you on the phone and get you talking. The question is, does that work? Have you spent money on yelp ads because of the attractive sounding females that call you? It got me thinking like something, when I call you to talk about lighting would you rather have an attractive sounding female call you? I don’t know, maybe there’s a thing there. But anyways, just every time I get a call from yelp and I got one the other day and it got me chuckling, because it is consistently the same thing, a flirtatious female on the other line. Anyways what’s been your experience with Yelp? What do you think, is it worth having a female voice to make the calls to make the introductions and set up meetings? Or is that not really important to you, let me know how you feel from a business standpoint and from the consumer standpoint. Alright guys Captain Matt out, I’ll talk to you soon.